Designer Babies and the Chilling Echoes of Eugenics 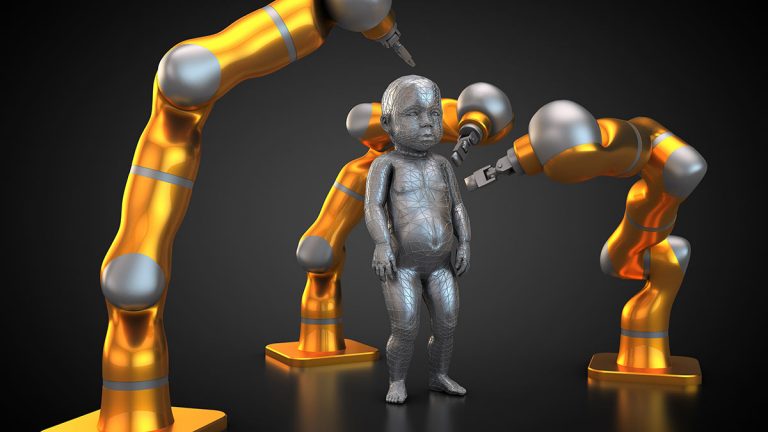 What if we could use science to eliminate disease, deformity, and mental disabilities? What if the tools of modern technology could make us smarter, stronger, and more beautiful?

What if we could put an end, once and for all, to every mother’s fear that their child might be born with something not quite right?

These are the questions Chinese researchers are trying to answer. They’ve recently announced a breakthrough in using genetic engineering to remove certain defects in human embryos responsible for congenital conditions. This should be good news, right? After all, what is science for, if not to help us live longer, healthier, and more productive lives? The problem is, this kind of thinking has taken hold in America once before, and with disastrous consequences.

In the early 20th century, science was all the rage. Educated men thought they could use their superior knowledge to improve the human race. What a noble endeavor! With knowledge of genetics recently having come into prominence thanks to the works of Charles Darwin, college professors and men of science were eager to apply the findings in a practical way. If traits are passed down from generation to generation, they reasoned, then the species can be improved by choosing only to pass down good traits, while screening out bad ones. This process was known as eugenics, and its proponents included many well-respected people, most notably President Woodrow Wilson, the only president ever to hold a doctoral degree.

But how do you stop people with “undesirable” traits from breeding and passing them on to future generations? Easy, by forced sterilization. In the same way you would neuter a dog to keep it from reproducing, state governments across America passed laws permitting the forced sterilization of people deemed to be insane, feebleminded, deformed, or otherwise posing a menace to the health of the species. This frequently included criminals, as criminality was at the time believed to be an inherited characteristic. All told, 60,000 Americans lost their right to reproduce at the hands of a scientific community that insisted it could improve mankind.

Ultimately, the horrors of the Nazi movement in Germany, which took eugenics to extremes undreamt of by most Americans, soured the national appetite for forced sterilization. By the mid-1970s the practice came to an end even in mental institutions, but the Supreme Court decision finding such sterilization constitutional has never been overturned.

Now, what does this have to do with the Chinese research on embryos? Surely such direct manipulation of the egg will result in more healthy reproduction, not less, and requires no interference with individual freedoms, right? Don’t be so sure.

Imagine a world where, for the right price, you can guarantee that your children won’t have any genetic defects, that they will be tall, strong, resistant to disease, symmetrical, and intelligent, all through a simple medical procedure. Now imagine that not everyone can afford this procedure. What do you think will happen after a couple of generations? The “normal” people, unaltered by genetic modification, will not possibly be able to compete with the supermen and women created by science. They will be inferior in every way, and thus ineligible for the best jobs, unable to keep up in the best schools, and forget about sports or any kind of athletic competition. Social mobility will not be an option, and their children will be doomed to the same fate, a permanent underclass at the mercy of their betters.

How long could such a system persist? How long before the genetically inferior humans become mere leeches dependent on state charity, or else utilized as menial slaves for everyone else, or perhaps be outright forbidden from procreating? It sounds like science fiction, but it’s a simple and logical progression from a system that allows some people to be dramatically improved by genetic engineering while others are left behind.

Aside from these practical concerns, there are any number of moral and ethical problems with tinkering with human life. Modern medicine has indeed done wonders for our way of life, but there is a good reason why many governments have banned human cloning and other such genetic experiments. Blind allegiance to science without stopping to consider broader philosophical questions of humanity, liberty, and justice, can only end badly, as history has taught us on more than one occasion. Engineering works great for building bridges; It’s much less advisable for designing societies.